This weekend for Fall Break, I set out to ride the 143 mile Tabeguache Trail in two days. Food packing was a little ambitious: just over 4 pounds total, average might be 120 cal/oz, so maybe 7,600 calories.
-Cookie Dough: two sticks of butter worth (over a pound)
-Almost a full can of cashews
-12 oz of Fritos Concentrate (stick them in the blender!)
-Bacon and Cheddar
-2 dinners each with crushed ramen, potato flakes, bacon, cheddar, bacon grease, fresh garlic, cayenne pepper

Seems a little optimistic for that kind of energy output.... but I left the door with 12 pounds of water on board...

So after riding 12 easy miles to the Lunch Loops trailhead, I took off for the first 20 mile section to Hwy 141. 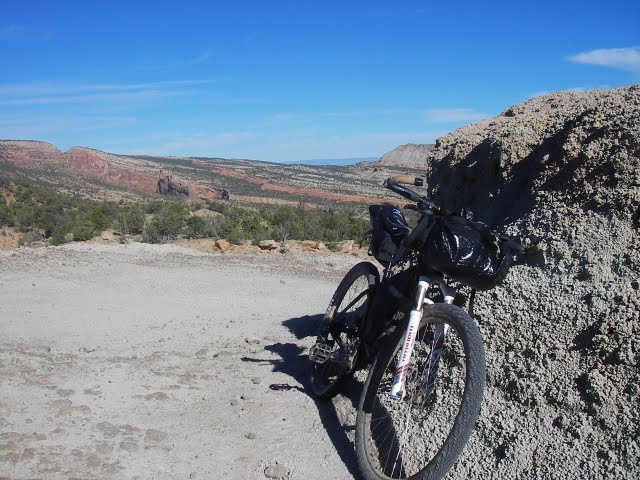 It got hot pretty quickly, and soon I was crusted in salt... why I did not put the salt into my water I do not know.
For some minimalistic reason I left the bandana and bike gloves home.
Here's the solution, while cranking up 9 mile hill just after 141 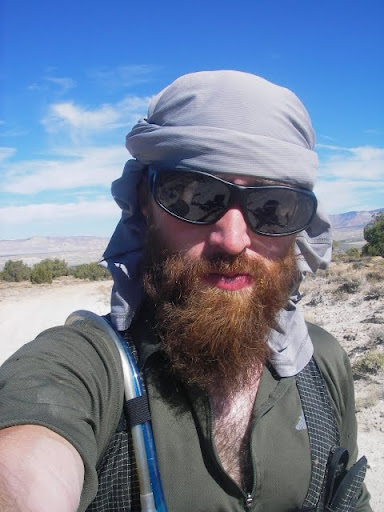 After plowing through Cactus Park, I was positively fried. Brains baked, covered in salt, dehydrated and low on energy, but given the food and water rationing needs, I didn't want to consume too much at once.
Poor planning strikes again.... by the time I was getting close to Dominguez Campground, I was done in. Only a mild bonk, but it was enough to make everything unfun and break my will to fight....
So I stopped at the water pipe just above the campground, and made dinner #1 at 4:30 pm. It was incredible, to drink unlimited supplies of water, eat salt, and eat hot food.
Then I just laid down and rested, digested, and decided in the present state, I should bivy right there that night. Then around 6 pm, I cranked up the stove again to make dinner #2, put on the long underwear bottoms, windpants, puffy coat... somehow I got cold quick, between the deprived state of my body and being in a canyon nearing sunset. So, I moved shop down a bit to the campground and started up a fire, and just sat there for a few hours until I ran out of wood around 10 pm. It was really refreshing to just be outside, listening to the woods, thinking slowly and not striving to move fast. Then I blew up my brand new 8.5 oz custom Kooka Bay sleeping pad and slept like a rock for 10 beautiful hours. Probably one of my best nights of sleep ever on the trail.
Upon waking up and stuffing my face with cookie dough and bacon, I started the ride back home. So I could take my time and explore a bit, and took a short variation for part of the Tab through Cactus Park, which lead me to this canyon... I'd been here before for sure. 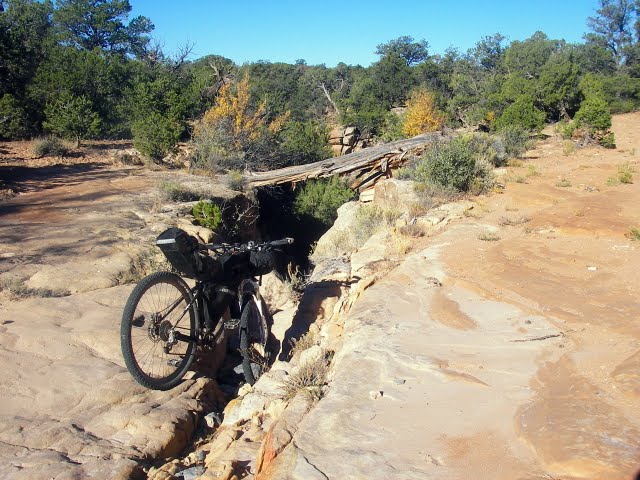 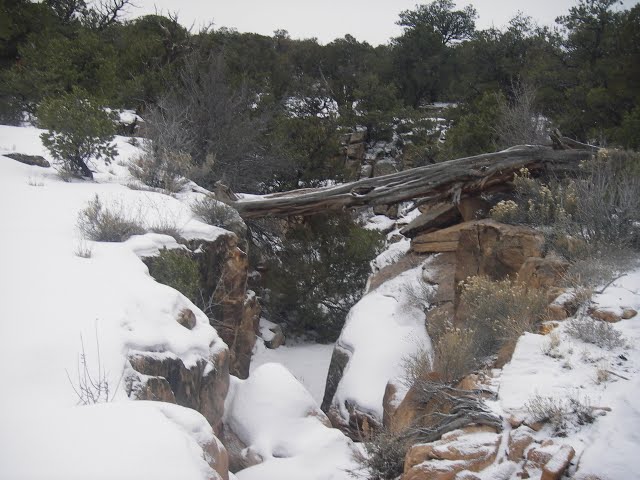 There hadn't been nearly enough hike a bike on this trip yet... so, with my energy levels now back up, I checked the map, looked around a bit... and scrambled down in - no easy trick with a loaded bike. 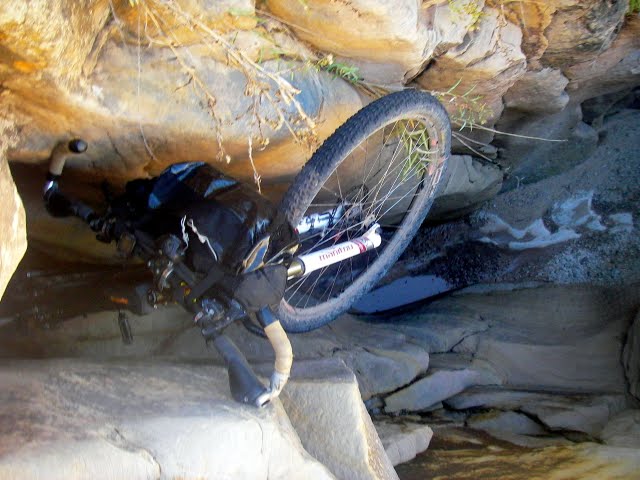 Chock the bike in then climb down to it, then lower the bike and chock it again, then climb to the bottom and pull it out. 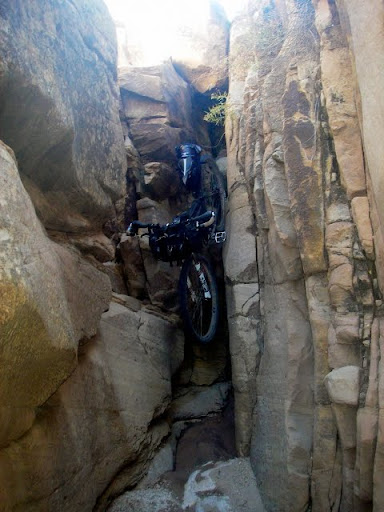 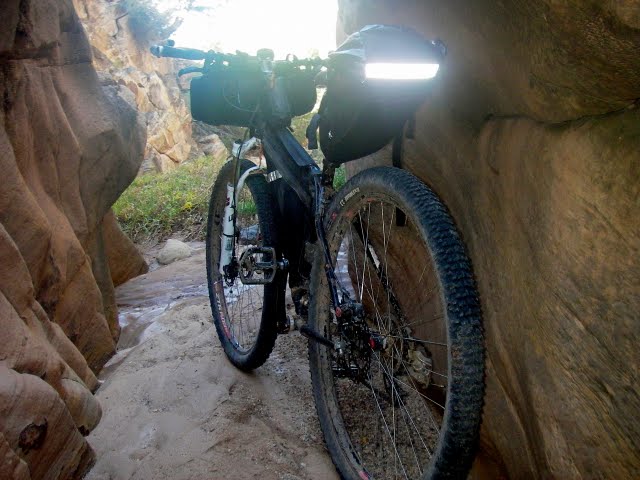 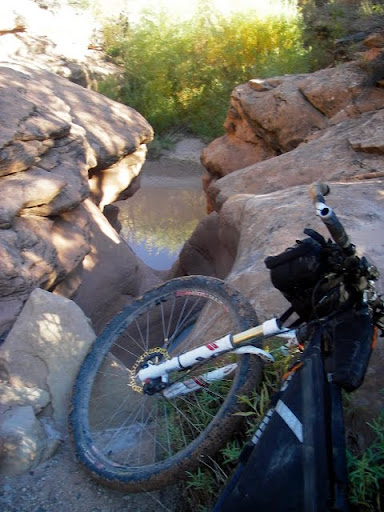 Cliff number one came along quickly. A brief scramble got me around the mud hole at the bottom.

Then along came cliff number two. 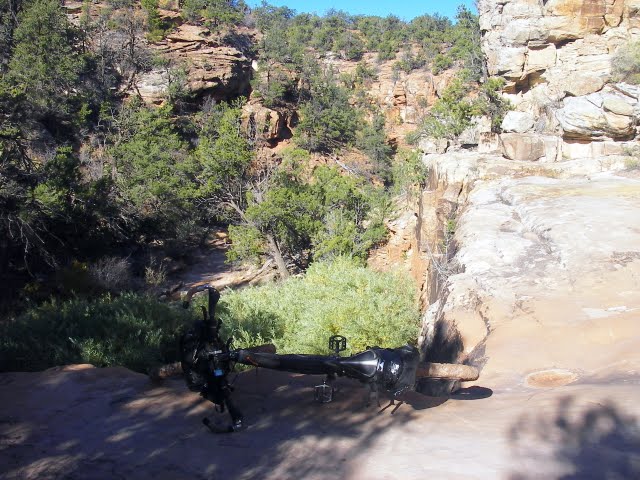 It was a little bigger and required another scramble, then a bike drop down a ledge to get around it. 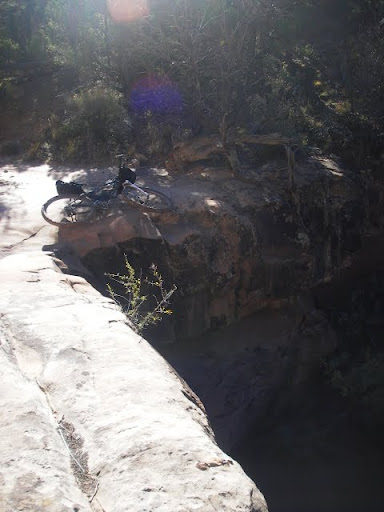 Then a bit of bushwacking through some saplings got me to cliffs three and four... 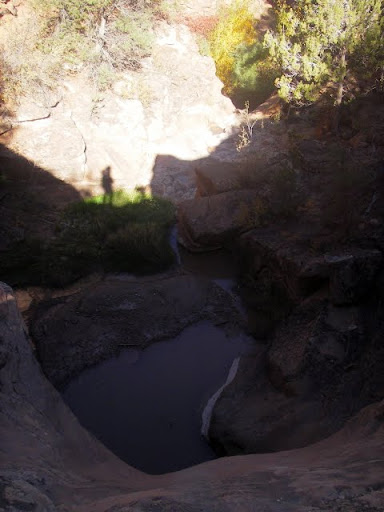 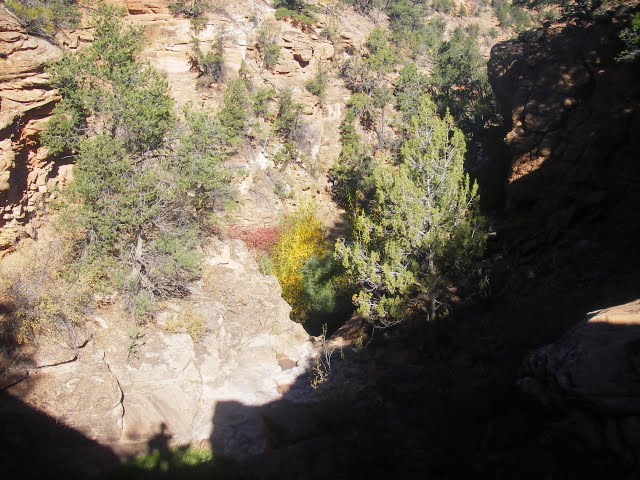 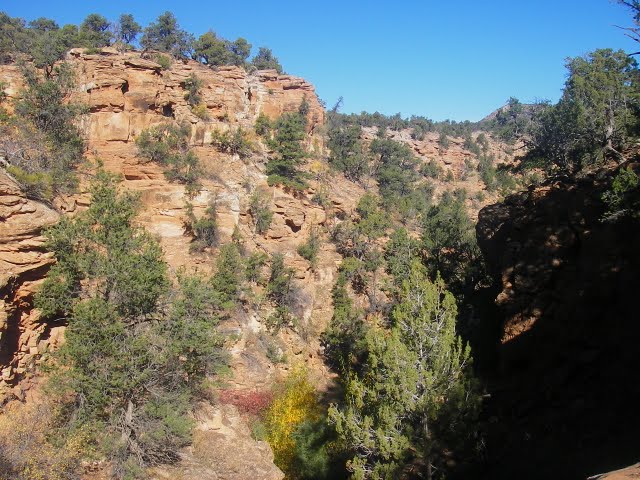 Two consecutive 50 foot or bigger cliffs in a row, with no good downclimbs... this is a job for ropes, not bikes. Time to bail up. 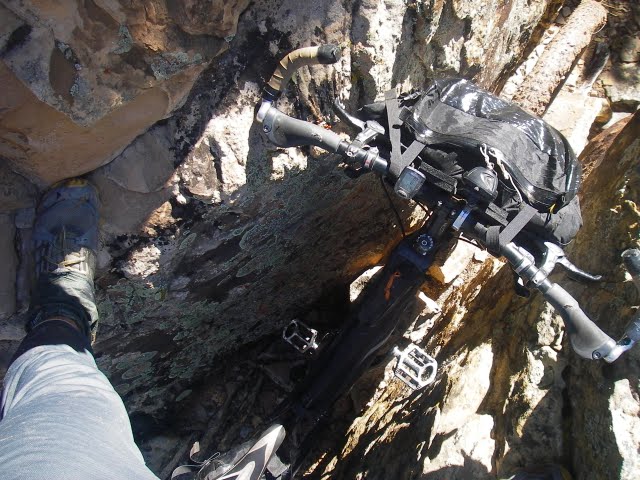 Some more scrambling... third class terrain with a bike over my head... got me up no problemo. The trail wasn't too far from the top, as the map predicted. 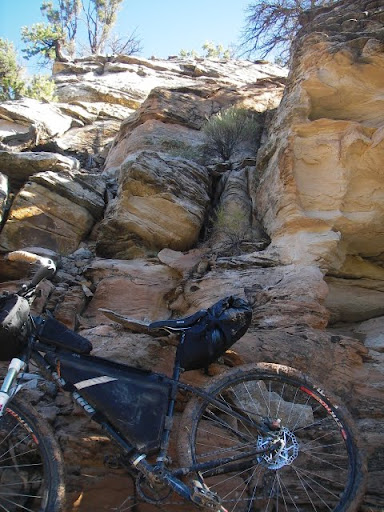 The remainder of the ride down 9 mile hill then back home from Whitewater proceeded uneventfully. Now I get to eat, veg out, and draw bike wheels in Solidworks. 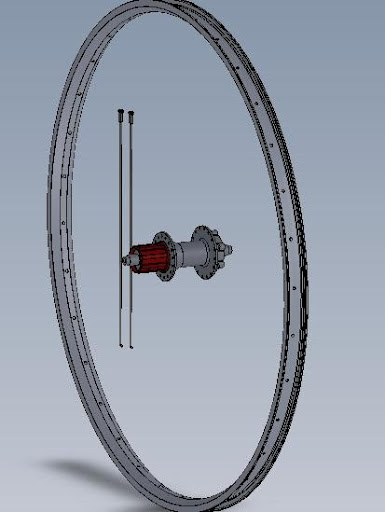